I was one of those kids who played with the box instead of the toy. I enjoyed exercising my imagination - creating something out of nothing.  Being an only child may have contributed to my evolving imagination and propensity to create stories. Since I had no brothers or sisters to share the blame or accuse for mishaps - I had to come up with a story. A good story.
When I was around 7 years old - I got a Super 8 Movie camera and made short films with the kids in the neighborhood - putting my imagination on celluloid.

Live on Stage
I discovered theatre while I was in high school and became addicted to the immediate feedback of laughter and applause. Acting allowed me to explore characters and imagine myself as another person. It also allowed me to explore "plays" - other people's imaginations. Acting continued through College to the community theatre stage and ultimately on the big screen as a sewer dweller in the movie "Escape From New York".  I sought out the live feedback once again with a few comedy sketch/improv groups around St. Louis.  Although improvisation can be a terrifying experience, it did give me an opportunity to create my own lines and test my own jokes and write my own skits. Putting my imagination on paper, and testing it live in front of a crowd. 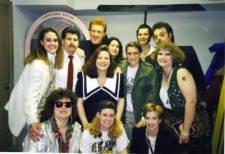 I tried my hand at writing a few one-act plays that to my surprise, were produced right away. I didn't make the full leap into being a playwright until I was acting in a Murder Mystery and I bet the director that I could write a better play. A play with an actual plot and real humor - no cheese.  I went home that night and wrote "Murder Me Always" which ended up being produced the very next year. It was a success. The theatre group wanted another and another.

I have written 14 Murder Mystery plays and created a website called Play-dead.com. My website features all of my scripts and offers the rights to any group, large or small who wishes to perform them.
As of this writing, my plays have been produced all over the world from the UK, Canada, Australia, Malta, Spain, Vietnam, and Japan.  I have also written 2 books of short stories which revolve around a young boy growing up in the 1970s.

Even though I have made several detours in my creative ambitions, I have found my niche as a playwright. I still retrace my steps and return to the stage as an actor and pick up a camera and make films, but writing is my passion.

An old High school friend said to me:  'Wow Mueller, you're still doing the same things you did when you were 7 years old! Living in your imagination. That's amazing!"   I don't know if it's amazing. I mean, I pretty much thought that was the idea. Pick something you really love to do and never stop doing it. I loved using my imagination. And I haven't stopped. Imagine that.